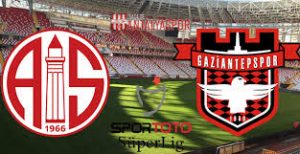 Antalyaspor hosts Gaziantepspor in a match from the last 34th round of the Turkish Super Lig. The game will be played on Friday night at the Antalya Stadyumu.

The home team already knows his final position in the league standings. Inspired by the presence of the legendary striker Samuel Eto’o, Antalyaspor is going to end the season at 5th place. They played strongly during this campaign and proved to be one of the good teams in the Super Lig. They enjoyed four wins in their last five matches, but their lack of a better concistency cost them a better position in the standings.

As for Gaziantepspor, it was a terrible season for them. They are going to finish at one of the last two places in the league, which means that they are relegating to the 1. Lig for the next season. At the moment they are 17th in the standings, having just one point more than the 18th Adanaspor.

The current form of Antaliyaspor and Gaziantepspor is totally different at the moment. How we already pointed out, Antalyaspor won four of their last five matches in the Super Lig. In same time, Gaziantepspor are in another bad run of four consecutive losses in the league. They have won just 7 of their 33 games this season and lost 21. They have also conceded 61 goals so far, having scored just 29.

It’s clear that Antalyaspor are the clear favourite in this match. They will try to finish their Super Lig campaign on a high note with a fourth consecutive win. The big inspiration for them is called Samuel Eto’o. Former player of Barcelona, Inter and Chelsea, Eto’o scored 17 goals in the league this season. He proved to be one of the best players in the Turkish league, which is not surprising at all.