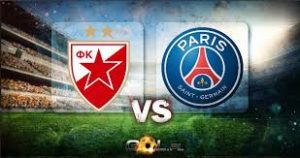 Crvena Zvezda faces PSG in a game from Group C of the Champions League. Here are our thoughts about this clash in the capital city of Belgrade, Serbia.

Surprising for many, but Crvena Zvezda won 4 points so far in this incredibly tough group. Many people expected that the Serbians won’t win any points at all, but they managed to beat Liverpool and get a point against Napoli. On both occasions these matches were played in Belgrade. Just like this one.

Right now Crvena Zvezda are 4th with 4 points won, but theoretically they even have chances to finish third. If they want this to happen, they must beat PSG and hope that Napoli will beat Liverpool in the other game. But if nothing of this happens, Crvena Zvezda can be very proud of what they did in this group so far.

In their previous game the Serbians suffered a defeat, losing with 1-3 their visit to Napoli. El Fardou Ben Nabouhane scored for Vladan Milojevic’ team, but before this Napoli scored three times via Marek Hamsik and Dries Mertens.

PSG are currently 2nd in the group with 8 points, but they can even finish first, if they win in Belgrade. Depending on what the leader Napoli will do against Liverpool at the Anfield, of course.

The French team started its Champions League campaign with a loss at the Anfield, but after this Thomas Tuchel’s team went unbeaten in its next four matches. In their last game PSG achieved a crucial 2-1 win over Liverpool at home, thanks to the goals scored by Juan Bernat and Neymar. It was very important for the Parisians to win this one and they did it.

That’s our thoughts about the Champions League clash between Crvena Zvezda and PSG. Good luck, pals!