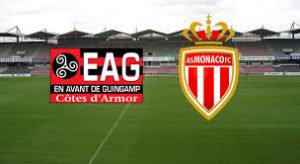 Guingamp hosts Monaco in a match from the 34th round of the French Ligue 1. Let’s see what’s happening between these two teams.

Guingamp are currently 11th in the league, comfortably sitting in the middle of the table. The team have 42 points and a record of 11 wins, 9 draws and 13 defeats. In their last five games Guingamp won twice, lost twice and made one draw – against Lille in the previous round.

This position is great for Guingamp. The team’s ambition before the start of the season was to survive and keep its place in the Ligue 1. And so far they are doing pretty well, having enough points to survive even mathematically. To be in the middle of the standings is great for this team.

Monaco on the other hand lost their Ligue 1 title to PSG. And it’s completely normal – last season Leonardo Jardim’s team beat PSG for the title, but now the Parisians took the crown back. After spending so much money for new players last summer, especially for Neymar.

For Monaco it’s still a good season. The former champions are 2nd in the Ligue 1 standings with 70 points and a record of 21 wins, 7 draws and 5 defeats. In their last five games they won three times and made one draw, but also suffered a devastating 1-7 loss against the new champion PSG in the previous round.

It was a terrible performance by Monaco. It remains to be seen how this loss is going to affect the team for its next game. For sure, Jardim’s team have to redeem themselves in front of the fans. Can they bounce back with a win against Guingamp? It’s another game away from home, so it won’t be easy. But they must show why they were champions last season.