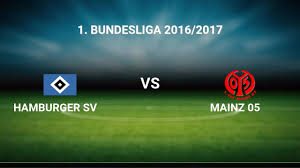 Hamburger SV hosts Mainz 05 in a match from the 32th round of the German Bundesliga. This match is absolutely crucial in a fight against relegation in league.

Both teams have the same amount of points – 33, with Mainz being 15th and Hamburger 16th. Right now Hamburger are placed on the play-off position, but they could move away from it if they manage to win against Mainz at home.

Hamburger are currently in a bad run of three consecutive losses in the Bundesliga. In the last round they suffered a very bad defeat with 4-0 against Augsburg away from home.

As for Mainz, they also lost their last match against Borussia M’gladbach at home.

Hamburger is without the goalkeeper Rene Adler until the end of the season, while Albin Ekdal and Nicolai Muller are doubtful. The good news come from the recovery of Nabil Bahoui and Andreas Hirzel, who are once again ready to play for HSV.

As for Mainz 05, the away team can’t use the injured Florian Muller, while Danny Latza, Levin Öztunali, Jairo Samperio Bustara, Jean-Philippe Gbamin, Marin Sverko and Gaetan Bussman are all doubtful for the clash. Emil Berggreen on the other hand is recovered from his latest injury and he’s now able to play once again for Mainz.

This is a really crucial game in the battle against relegation in the Bundesliga. Nobody wants to play the relegation play-off, so you should expect to see both teams very moti-vated to win.

The last time when Hamburger and Mainz 05 met was in December, when Mainz ma-naged to win wtih 3-1 at home. It was a terrific game for Danny Latza, who scored a hatt-trick for the winners. Now Hamburger will seek a payback for this defeat, but can they do it?