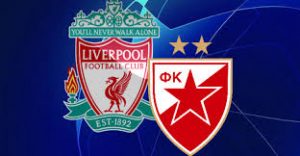 Let’s take a trip to the legendary Anfield Stadium, where Liverpool hosts Crvena Zvezda in a game from Group C of the Champions League.

Liverpool reached the final of the competition last season, so now the Reds are very motivated to do it again. They started their campaign with a fantastic win over PSG at home, but in their next match they suffered a defeat against Napoli at the San Paolo. Now Liverpool have the task to return on the winning road and a game against the Serbian champion is a great opportunity for this.

Crvena Zvezda are the underdogs in this group, of course. The Serbians surprised a lot of people with winning a point against Napoli in the first round. In the second round they were beaten pretty badly, suffering a 1-6 defeat during the visit to PSG. This game showed us that the difference in the level between these teams is very big at the moment.

Liverpool are looking very good since the start of the season. They are moving very well in the Premier League, while their win over PSG in the Champions League showed everyone that they are ready to impress in Europe once again. Of course, the loss against Napoli was unpleasant, but Liverpool still have a lot of games left to fix this mistake.

As for Crvena Zvezda, we shall say that the Serbian team didn’t have a lot of luck with the draw in this group. They’d be happy with every point they can win until the end of the group stage, that’s for sure.

That’s our look at the Champions League battle between Liverpool and Crvena Zvezda at the Anfield Stadium. Obviously the English team is the big favourite here. Crvena Zvezda are not a bad team, but there’s a big difference in terms of quality between these two sides.