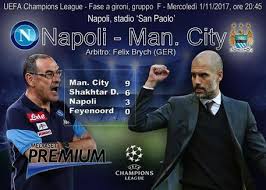 Napoli hosts Manchester City in a game from Group F of the UEFA Champions League.

These two sides meet again just two weeks after their first meeting at the Etihad Stadium in Manchester. This game ended with a 2-1 win for the English team, who is perfect in the group so far with three wins from three games played. Manchester City are impressive this season and their goal difference is also proving that – 8:1 after the first three rounds.

Raheem Sterling and Gabriel Jesus scored the goals for City two weeks ago, while Amadou Diawara scored for Napoli from a penalty kick.

And if Manchester City are enjoying a perfect record in the group, things are not that perfect for Napoli. The Italian team suffered a second defeat in the group. Right now they are third with 3 points won, being on 3 points behind the 2nd Shakthar Donetsk. It’s clear what Napoli need right now – points. They need them as soon as possible, if they want to keep their chances of progressing to the next phase of the competition.

In the English Premier League Manchester City are also leaders. They are on five points ahead of Manchester United with a near perfect record – nine wins and one draw in the first ten rounds. In their last game The Citizens enjoyed a 3-2 win over West Bromwich Albion away from home.

In the Serie A Napoli are doing better than they are doing in the Champions League. Maurizio Sarri’s team is leading the standings with ten wins from eleven games played so far. They have 3 points advantage in front of champions Juventus and so far they are looking as a legit contender for the gold medals. But can they show a bit of the same in the Champions League as well?