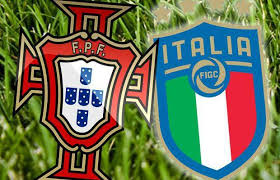 Portugal hosts Italy in a match from Group 3 of League A of the UEFA Nations League. This clash is going to be played at the Estadio da Luz in the Portuguese capital Lisboa.

For the European champion Portugal this is going to be a first match in UEFA’s newest competition. After finishing their participation at the World Cup, Selecao have played just one match – a friendly game against Croatia, which ended with a 1-1 draw. Ivan Perisic scored for the Croatian team in the city of Sao Joao da Venda, but Pepe managed to equalize soon after this. In this game Portugal were playing without their superstar Cristiano Ronaldo, who was still resting after the end of the previous season.

Italy on the other hand already played their first match in the new competition. The Azzurri made a kind of dissapointing 1-1 draw against Poland at home. Piotr Zielinski opened the score for the Polish team at the Stadio Renato Dall’Ara, but Jorginho from a penalty kick saved the point for the Italian team. Italy’s manager Roberto Mancini started the match with Mario Balotelli as a number 9, but his decision to call back the player at the national team didn’t seem to be very successful in this game. Balotelli was replaced by Andrea Belotti after just a hour of play.

Juventus’ Cristiano Ronaldo is back for the national team, so Portugal will have a huge weapon for this game. Selecao are playing at home, so everyone would expect from them to play an offensive minded game and look for goals. Italy on the other hand will try to do better than they did against Poland at Bologna. So far Roberto Mancini did not start very impressive at his new job, but now he will have a chance to impress against the reigning European champion.