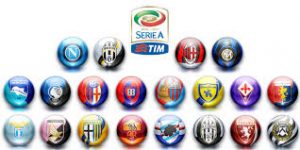 Almost everything that happened in the Italian Serie A last weekend was in Juventus’ favour. The Old Lady won the big derby against Napoli – one of the biggest contenders for their crown, while in same time Roma lost two points during their visit against Empoli. All of this allowed Juve to gain
four points advantage in front of Roma after the first eleven rounds of the championship.

The loss at Juventus Stadium dropped Napoli to 5th place in the Serie A, with Lazio and Milan climbing up in the table. After winning four of their last five games, now Milan are third in Serie A, while Lazio are fourth after avoiding a loss in all of their last five matches. These two teams are clearly in good form right now, so we should follow their progress very carefully. They could turn to be really important factors in the league this season.

A big reason for Lazio’s progress this season is Ciro Immobile. Torino and Dortmund’s former striker is in a great form since the start of the campaign, scoring 9 goals so far in the league. There’s just one player who scored more than him in the Serie A so far and this is Roma’s Edin Dzeko.

Last weekend we saw a very special moment for one of Serie A’s best strikers Gonzalo Higuain. El Pipita faced his former team Napoli in Turin and even scored the winning goal for the 2-1 win. Paying respect to his former club and its fans, Higuain refused to celebrate his goal. It didn’t stopped Napoli’s fans of abusing and insulting him in every way they could, though.

The big news of the week came from Inter Milan. Soon after he was appointed as the club’s new manager, Frank de Boer was sacked. The Dutch tactician didn’t prove that he could change the way Inter performs in the league, after replacing Roberto Mancini on helm. With Frank de Boer as head coach, Inter lost four of its last five Serie A games, which is a really unacceptable for a club of this calibre. Right now Inter are being led by the interim coach Stefano Vecchi, so we should to see who will replace De Boer on full basis. There are different rumours in this direction, with the names of Guus Hiddink and Stefano Pioli being mentioned in the press.

Whoever inter’s board choose to replace Frank de Boer, it’s really sad to witness the decline of this famous club. In 2010 Inter won the treble with Jose Mourinho on helm, but now – six years later, there’s not even a glimpse of this majestic team, who conquered not just Italy, but Europe as well.

This weekend the champion Juventus travells to Verona to face Chievo, while Roma hosts Bologna at the Olimpico. Milan travels to Palermo, while Napoli and Lazio will fight for the win in a very interesting game at the Stadio San Paolo. Meanwhile, Inter will have a good chance to take a breath of fresh air, hosting at the San Siro the weakest team in the Serie A Crotone.