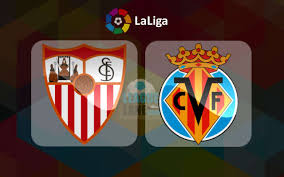 Sevilla welcomes Villarreal at the Ramon Sanchez Pizjuan in a match from the second round of the Spanish La Liga. Let’s take a look at it.

Sevilla started the new season in La Liga pretty convincing, beating Rayo Vallecano with 4-1 away from home. The young Portuguese striker Andre Silva was the hero of the day, scoring a hattrick for the Andalusians. Silva is loaned to Sevilla from Milan and so far it looks like the Spanish club made the correct decision by signing him. He’s a talented striker, who didn’t really make it in Milan, for some strange reason. But now he has a chance to show his true worth in La Liga.

Last season Sevilla didn’t do very well in La Liga, missing on qualifying again for the Champions League. Led by the former manager Enzo Montella, the team reached the final of the Copa del Rey, but underperformed in La Liga. Now the manager Pablo Machin has the task to change this and bring back Sevilla among the best in the country.

During the week the Andalusians had a game in the Europa League as well. They won with 1-0 their visit to Sigma Olomouc in a first playoff for entering Europa League. The only goal in the game was scored by Pablo Sarabia just six minutes before the end.

Villarreal began their season in La Liga with a dissapointing 1-2 loss at home against Real Sociedad. Gerard Moreno opened the score for the Yellow Submarine, but the home team was unable to keep its advantage. Now Villarreal will try to win their first points, but against Sevilla it’s going to be pretty hard.

This is our take on the La Liga clash between Sevilla and Villarreal at the Ramon Sanchez Pizjuan. Good luck!