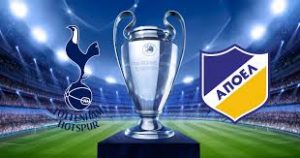 Tottenham Hotspur hosts APOEL in a match from Group H of the UEFA Champions League. The game is going to be played at Wembley Stadium in the English capital London.

Tottenham surprised a lot of people by beating Real Madrid for the first place in this group. Mauricio Pochettino’s team is unbeaten in the competition so far, including in two games against the Spanish giants. This is a huge improvement compared to last season, when Tottenham were unable to get through the group stage and reach the 1/8-finals.

This game is just a formality for Tottenham. No matter what happens against APOEL at the Wembley, Tottenham will win this group. Now Mauricio Pochettino has a chance to use some of his backup players and give them a chance to shine in the Champions League. It’s interesting to see which players Pochettino will pick against APOEL.

As for APOEL, the Cypriots still have a chance to beat Borussia Dortmund for the third place. Right now APOEL are on par with Dortmund – both teams have 2 points won so far. In the same time Borussia Dortmund are having a tough visit to Estadio Santiago Bernabeu against Real Madrid. This means that even a point against Tottenham could qualify APOEL for the 1/8-finals.

A lot of things depend on how Tottenham will approach this game. Are they going to be fully motivated to win it, after already clinching the first place in this group? Or they are going to be more relaxed, which would increase APOEL’s chances at the Wembley?

Against Borussia Dortmund APOEL proved that they are a capable team. They won two points against the German team and now they will try to do the same against Tottenham – win at least a point in London. And hope that Real Madrid will do them a favour against Dortmund.