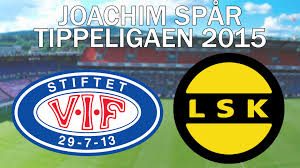 Vålerenga hosts Lillestrøm in a game from the 14th round of the Norway’s Eliteserien. This match is going to be played on Saturday night.

Both teams are currently positioned in the middle of the standings. Vålerenga are currently 7th with 18 points won, while Lillestrøm are 10th with just one point less – 17. Whoever wins this clash could improve its position in the league standings drastically.

We could say that Lillestrøm are the team in a better form at the moment. Right now they are the only team in the Eliteserien who is in an impressive run of three consecutive wins. They have won against Tromso, Stabaek and Viking, which allowed them to improve their position in the standings in a big way. Before making this run of a three consecutive wins, Lillestrøm have won just two games since the start of the season.

As for Vålerenga, they are pretty inconsistent since the start of the season. In their last five matches Vålerenga won two times, lost once and made two draws.

In their last game Vålerenga shared the points with Stromsgodset after a 1-1 draw at home.

We could hardly say that one of these two teams have a serious advantage in the head to head clashes in the last few years. In the last six games played between them, Lillestrøm won twice, while Vålerenga won once – a 2-0 win in 2015. The remaining three matches ended with a draw.

For the last time Vålerenga and Lillestrøm met in October 2016, when the game ended with a 1-1 draw.

Taking into account how close these two teams are to each other and how similar their performance is, we should expect a competitive game from them. It’s really difficult ot say that one of them has an advantage, but have in mind that Vålerenga are playing at home.