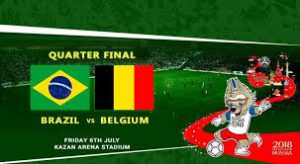 The teams of Brazil and Belgium face each other in Kazan in a match from the 1/4-finals of the FIFA World Cup. This is going to be a huge clash, so let’s have a look at it.

Brazil are regarded as one of the big favourites to win the World Cup this year. Selecao are playing for their 6th title in the tournament. In the group stage Brazil finished first with two wins and one draw, while in the previous round they outperformed Mexico and won with 2-0. Neymar and Roberto Firmino scored the two goals for the South American team, who didn’t face much problems against El Tri.

Brazil’s manager welcomes Marcelo back in the team, but he can’t use the influental midfielder Casemiro. The Real Madrid ace recieved an yellow card against Mexico, which would not allow him to play in the next game. He will be replaced in the starting eleven by another player with the same characteristics – Manchester City’s Fernandinho. The other problem for Tite is the injury of winger Douglas Costa, who remains sidelined for Selecao.

Belgium had a serious scare during the 1/8-final against Japan. The Red Devils were close to elimination, but they managed to overcome a 0-2 deficit against the Blue Samurai and win the match with 3-2. It was Nacer Chadli’s goal in the injury time which allowed Belgium to avoid extra time and qualify for the next round. Roberto Martinez’ team had some serious problems against Japan, but the most important thing is that the team showed its courage and escaped from a very difficult situation. But this must be a warning for the Belgian side – if they perform like this against Brazil, their chances to win would be reduced to a minimum.

Unlike Tite, Roberto Martinez has a full squad to choose from. But as we know how the Belgian team performed against Japan, it won’t be surprising if the Spanish manager make some changes in his starting line-up. Players like Dries Mertens and Yannick Carrasco didn’t impress against the Blue Samurai, so they could get replaced. But we shall wait and see what Martinez is going to decide.

With the exception of welcoming back Marcelo and replacing Casemiro with Fernandinho, Tite shall not make any other changes against Belgium. The third change he could make is replacing Gabriel Jesus with Roberto Firmino, but this is not one hundred percent sure, too. Firmino scored a goal against Mexico, but so far Gabriel Jesus is the preferred choice for Tite.

This shall be a great game between two great teams. Brazil are one of the big favourites to win the World Cup, while Belgium are regarded as “black horses” for the title. The Red Devils were not particularly impressive against Japan, but against Brazil their motivation and concentration should be even higher. We can expect some goals in this game in Kazan, that’s for sure. Both sides have great attacking options. But it will also be important how they do in defense.