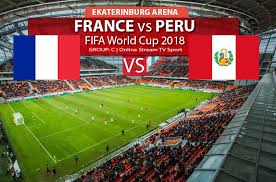 When they arrived in Russia, France were regarded as one of the biggest favourites to win the 2018 World Cup. After all, they have an incredible squad, filled with superstars at every position. Two years ago they showed their class and reached the final of the Euro 2016. Today France have a lot to proove against Peru at the Ekaterinburg Arena in the city of Ekaterinburg.

France started the World Cup with a win – 2-1 against Australia, but Didier Deschamps’ team had to deal with a lot of criticism after the game. Mainly because it was harder for them than it was expected. Most of the French fans thought that, because of the quality of their team, the match against the Socceroos would be a walk in the park. Well, it was not. Les Bleus needed a late own goal by the Australian team in order to win. And let’s be fair – Deschamps’ players did not look like a team which is going to win the World Cup.

This is why France need a dominant performance against Peru on Thursday. Didier Deschamps already promised that his team is going to look different against Les Incas. They should, because a second consecutive bad game would be a bad sign for the 1998 champions.

Peru on the other hand are in a “all or nothing” mode at the moment. Los Incas suffered a defeat against Denmark in their first game, which means that they need to take something from the match against France in order to keep their chances. If the Peruvian team loses against France as well, they will have to start packing their stuff for the airport. They won’t have a chance to reach the knockout phase. For Peru this is a first appearance at the World Cup since 36 years, so they really want to do well.

France’s biggest star Antoine Griezmann suffered an ankle injury against Australia, but Atletico Madrid’s striker is not seriously hurt. It’s expected that Griezmann will start against Peru. Chelsea’s Olivier Giroud on the other hand will try to return to the starting eleven. Against Australia Didier Deschamps used Antoine Griezmann, Kylian Mbappe and Ousmane Dembele in attack, with Giroud coming in during the second half. Maybe this time we will see the striker starting the match? If this happens, most likely it’s going to be Ousmane Dembele who will sit on the bench.

In the Peruvian squad it’s expected to see the captain Paolo Guerrero starting the match. The veteran striker was benched against Denmark, but now he could start against the big favourite in the group. One thing is for sure – Peru will need his experience against Les Bleus.

That’s what we had to say about the World Cup game between France and Peru. Of course, France are the favourite here, based on the quality of their team. But there’s something more important here. Didier Deschamps’ team will be very motivated to impress after what they showed against Australia. And this is not good news for Peru.