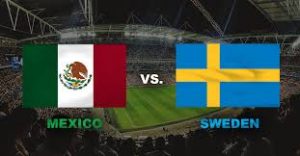 We are heading to the Ekaterinburg Arena in the city of Ekaterinburg, where Mexico and Sweden face each other in a match from Group F of the FIFA World Cup.

Mexico are leaders in the group with 6 points won so far. The Aztecs need just a draw against Sweden to oficially win this group. They have 3 points advantage in front of Germany and Sweden.

Sweden on the other hand are in a more complicated situation after the dramatic 1-2 loss against Germany. The Scandinavians need a good performance against Mexico and a win in order to progress. Although even if they win, it’s not one hundred percent that they qualify for the knockout phase. It also depends on the result between Germany and South Korea in the other game from the group.

Mexico surprised a lot of people with beating the world champion Germany in their opening game at the World Cup. The Aztecs played a brilliant game. Hirving Lozano’s goal in the first half was enough for them to beat the Mannschaft. In their second game Mexico enjoyed a 2-1 win against South Korea, thanks to the goals of Carlos Vela and Javier Hernandez.

Sweden started their participation at the World Cup with a 1-0 win over South Korea. They were pretty close to take something from Germany as well, but Toni Kroos’ free kick in the last seconds of the game allowed the Mannschaft to win. This result made the group really interesting at the moment. All four teams have chances to progress in certain situations, although some teams have much bigger chance than other.

Mexico’s manager Juan Carlos Osorio is well known as a coach who likes to change his starting eleven all of the time. Most likely Osorio will do it once again against Sweden. Marco Fabian could get his first start at the World Cup, while Jesus Corona is also among the players who could find themselves in the starting eleven.

Sweden do not have problems in their squad, regarding injured or suspended players. But some of their players have to be careful. Sebastian Larsson, Viktor Claesson and Albin Ekdal are just one yellow card away from suspension.

Mexico need just a draw to win this group, but don’t think that they will be playing for a draw. They have the mentality of winners and most surely they will try to finish their participation in the group with three wins from three games played. So far they are doing really well in the tournament. But this shall not be a surprise – Mexico have a really good team.

If Sweden do not find themselves at the 1/8-finals, they will feel a real regret for the way they were beaten by Germany in the last seconds of the game. They will fight for their qualification, but it will be hard to beat Mexico – that’s for sure.

This game is hard to predict, because both teams are pretty good and they will be motivated to win. We don’t think there are favourites in this case – game looks really even.