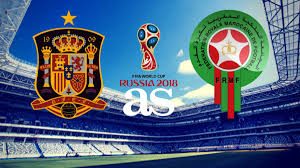 Let’s head to the Kaliningrad Stadium in the city of Kaliningrad, where Spain faces Morocco in a match from the third round of the group stage of the FIFA World Cup.

Spain have won 4 points from the first two matches against Portugal (3:3) and Iran (1:0). They need just a point to oficially qualify for the knockout phase of the tournament. But they will play for the win, because La Roja are fighting with Portugal for the first place in this group. Right now both teams have the same amount of points – 4. In the same time Portugal are playing against Iran.

Morocco are leaving the World Cup after two losses in their first two matches. They hoped for a better performance at the World Cup, especially after winning the African Cup of Nations and showing their quality lately. But things didn’t work out well for Morocco, who suffered two 0-1 defeats against Iran and Portugal. Now Herve Renard’s team is playing just for its honour and prestige. For the Moroccans it would be a relief to end their World Cup participation with a positive result against Spain.

Spain’s manager Fernando Hierro made some changes in his starting eleven in the previous match against Iran. Hierro picked Dani Carvajal and Lucas Vasquez for his team, leaving Nacho and Koke on the bench. It’d be interesting to see if Hierro will continue to make changes in the third game as well. As you know, Fernando Hierro was appointed as a manager of Spain just one day before the start of the World Cup. This happened after the former manager Julen Lopetegui was sensationally sacked by the Spanish Football Federation.

There are some rumours in the press that Fernando Hierro will rotate his squad once again, giving rest to some of his key players. It’s rumoured that players like Marco Asensio, Rodrigo, Saul or Thiago Alcantara could get the nod for the match with Morocco. Celta’s Iago Aspas is another player who could replace Diego Costa for the match. But these are just rumours, so we shall wait and see what Hierro have decided for the game.

Morocco will be without the injured Youssef Ait Bennasser for their last game in Russia. But in same time the manager Herve Renard can rely on key figures like Nabil Dirar and Nordin Amrabat. So far Morocco are without a single goal being scored at the 2018 World Cup, so most surely they will try to perform a little bit better against Spain.

Spain are the big favourite here, of course. The 2010 world champion is very close to reaching the 1/8-finals. You can be sure that Spain wants to win the group, so that’s why La Roja will be looking for a big win against Morocco. Most likely the fight between Spain and Portugal for the first place is going to be decided on the two teams’ goal difference. This means that every goal will be super important for Spain against Morocco.